Why Statistics Only Tell Half of the Story

It is unfortunate that statistics are only understood by mathematicians. Or so they tell us. Actually, they're wrong. I'm not so hot on the maths front, but I've mastered football statistics. I think. I see two types: game stats (goals scored, saves, corners) and technical stats, which are much more complicated - and those are the ones I'm not so sure about.

I also know enough to whoop with delight when I read that Tottenham Hotspur coach André Villas-Boas calls stats useless. No doubt he was talking about technical ones. I know' it's not the stats, they're just innocent, inactive numbers. It is the interpretation that causes all the problems. So, while still nursing the certainty that those damn numbers are trouble, let me tell you about the player who opened my eyes to the vagaries of interpretation.

You all remember Héctor Enrique, of course. He's my football statistics hero. He's the one...but what's this? You don't remember him? Well that's the point, really. In the 1986 World Cup he was the guy who prodded a short pass to Diego Maradona...and some 11 seconds and 50 yards later the England defence was in tatters and Maradona had scored one of the greatest goals of all time.
Enrique later joked about his assist. A good joke, and one that exposed the fallibility of stats. To give Enrique an assist for that goal would be ridiculous. But supposed he had trailed Maradona and, as he entered the penalty area, received a return pass and scored with a tap-in? In that case, Maradona's assist would be the vital, overriding but still unacknowledged stat.

The overall idea of keeping a record of assists is a good one, even though there is no convenient way of measuring their brilliance or otherwise. But the recognition that, thanks to interpretation, any category of football stats is likely to include both valuable and useless examples is worth bearing in mind.

The assist stat is useful information - if properly defined and interpreted, of course - and the word itself is a useful addition to the sport's vocabulary. It's not perfect and sometimes it may be necessary to give  two assists on goal. But why not if it acknowledges skill that would otherwise go unrecorded? 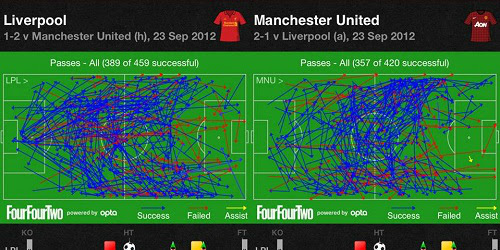 Assists are relatively harmless form of stats as they do not come into the category which coaches like to cull from computers then turn into training aids. Ground covered, pass completion, tackles missed, even physiological things like heart-rate, are veritable treasure trove of tempting stats. But these, I think, are the ones Villas-Boas finds of little use.

Stats can be downright misleading. Why are "clean sheets" added to a goalkeeper's stats as if he is solely responsible? The truth is he's more likely to be operating behind a great defence and had relatively little to do.

Does anyone know what all those percentages labelled "possession" really mean? I doubt it. Anyway, we need more stats: possession in the opposing half, in the final third, that sort of thing. And wouldn't a stat of "defence-splitting passes" be more revealing?

For now, I'll stick with the simplicity of the assist type of stat - one not enlisted in to the pseudo-intellectual world of modern coaching, but which tells us something about the men who play the sport. Héctor Enrique missed out on being given a ludicrous assist, but his later good humour reminds us goalscoring usually involves more than one player. Sho why no a stat that enables the honours to be shared?
Posted by Daniel Júnior at 14:57 No comments:

"Football is Roman-tic again" read the banner, greeting the return of the "Last Number 10". The hero and idol, the player who stood up to the board and sided with the fans, was back in blue and yellow, and leading the team oout. Seeing Juan Román Riquelme back at Boca Juniors was a victory for the supporters, who demanded his return at every opportunity. Now it is up to him to deliver their hopes on the pitch.
Eight months ago Riquelme was on the verge of a divorce from the club with which he won 10 titles, having entered contractual limbo, his pay "suspended". When Boca lost the Libertardoes Cup Final to Corinthians last June, Riquelme said he was leaving. "I'm empty, I can't give anything more to Boca," he said - which was even more damaging for the board than losing a continental final.

Riquelme had fought with coach Julio Falcioni over tactics, but more cruicially over influence and leadership of the squad. Falcioni, a disciplinarian hired in late 2009 to bring some order to Boca's house, rarely found space for Riquelme's type of player - the enganche. Riquelme complained he was player out of position, or simply left out, and resented the board's support of Falcioni, who in turn accused the squad of listening to the player more than him. 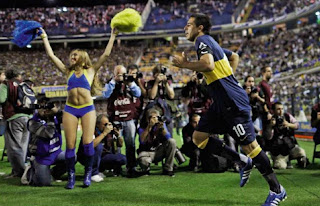 During the pair's cold war, Boca won the title in 2011 and were Libertadores finalists before the relationship reached breaking point. Yet with Riquelme gone, he was more present than ever at La Bombonera. The final match of last season ended with Boca fans demanding Falcioni go and Riquelme return.

With no alternative, president Daniel Angelici allowed Falcioni's contract to run down then pulled off a coup by persuading Carlos Bianchi to wake from his coaching slumber - "a siesta", as he himself put it. Riquelme seemed certain to also return with the man under whom he had won two Libertadores Cups and a Club World Cup.

Yet in early January, when the 34-year-old turned up for the first day of pre-season with Bianchi, he left barely minutes later. "I had to tell the president and the coach I am not going to play for Boca. Six months ago I made a decision and that is difficult to change," said Riquelme, before adding ominously: "I love this club, but I have my word."

Stumbling block
There was talk of him seeking a one-year extension on his deal which ends in 2014. Another issue was the exchange rate. As Argentinian clubs switch contracts from dollars to pesos, the current climate - there is 60 per cent difference between official exchange rate and the "parallel" rate for the dollar - makes for a significant stumbling block in talks. As Riquelme also said: "I had spoken to Bianchi about going to Chivas in the USA with him but then he took charge at Boca and everything changed."

With Riquelme more than happy to spend time with his family and friends, offers arrived. Brazil's Palmeiras claimed they had his verbal agreement to a move. Argentinos Juniors, where he started in the youth system before joining Boca aged 18, tried to find the means to pay the US$2.1 million stipulated in his suspended contract. Tigre, his local club, used their considerable political power to try to convince him. Yet what changed Riquelme's mind was pride, not pesos. He spoke to Bianchi after Boca lost a pre-season superclásico to River Plate. "I feel strongly about these colours and get angry when we lost the clásico," he said.

Bianchi opened door without hesitation, but another problem arose. Boca midfielder Leandro Somoza said: "A captain is important, but so is the group. It's not good having a captain and a group going in opposite directions."

Newspaper articles appeared about "who's friends with who" in the squad - and in the first match of the season against Quilmes, La Bombonera booed Somoza's every touch.

Riquelme's first game back proved a damp squib. At home to Unión de Santa Fe, who were without a win in 26 games - one of the longest runs in Argentinian football history - Boca were 2-0 down inside 35 minutes. The final result, 3-1, amply represented the ease in which Unión ruined the party.

"in 2007 I hadn't played for a long time either and that ended the best way possible," said Riquelme, referring to the club's most recent Libertadores success, for which he is credited as delivering almost single-handedly. That title, and his form, also came after he finally found a solution to a contract dispute.
Posted by Daniel Júnior at 23:37 No comments: