Since the World Cup of 1994 I have always been extolling the virtues of Spain - though, in the past, they looked like a team that was never going to win anything. That's to let you know that I can claim a long-time adherence to the Spanish style. And that is also by the way of unloading some of the guilt I feel as I now pick fault with it.
The Spanish have most beautifully reminded us that football is a game that is best played with the ball on the ground. That is where it can be coaxed and cajoled by the skilled players. The intricacy and artistry of such a game exposes the sheer crudity of a style based on aerial play in which the ball spends long periods in the air, uncontrolled by anyone.
My problem with Spain now is that, having got the ball back where it belongs, they fail to make much use of what is surely the sport's supreme skill: dribbling. The supreme skill, the unique skill, the most exciting and the most entertaining skill, going back to the days when the sport was known as "the dribbling game". 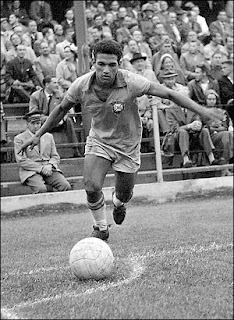 The atrophy of dribbling in sport is not blamed on Spain. A thoroughly unpleasant anti-dribbling culture has been allowed to grow up within football which sees dribbling as nothing more than a circus act, hot-dogging performed simply to show off and make fools of defenders.
A few tears back the anti-dribbling mentality came to the surface in, of all places, Brazil. In 2002 a player was yellow-carded for performing a series of step-overs on front of an opponent, with the referee judging him guilty of trying to provoke the opponent.
Under this mentality, the defenders feel entitled to retaliate, to foul and kick the dribblers.
Dribbling has become a dangerous, and therefore an endangered skill.
Robinho's early dribbling exploits for Santos in Brazil were met with hostility and veiled threats.
"He could end up having his leg broken," said Grêmio goalkeeper Danrlei. Muricy Ramalho, at the time the coach of São Paulo, regretted: "It seems that today you can't do a nice dribble any more."
Some players still try. Cristiano Ronaldo certainly does, and he in turn has been threatened. "After two minutes we will normally have to attack Ronaldo so much that he will have to leave the field," was Belgium goalkeeper Stijn Stijnen's matter-of-fact comment.
But it is of course Lionel Messi who currently personifies the magic of dribbling. It is Messi who makes Barcelona so much more complete a team than Spain. More complete, more dangerous and certainly more exciting. The brilliance of Messi's curling left-footed shot that scored the winning goal for Argentina in a recent 4-3 win over Brazil was unmistakable. But the quick surging dribble that led up to it, those few moments of thrilling suspense, made this goal so much more than the shot itself. Just as the final shot with which Diego Maradona scored in 1986 against England was totally eclipsed by the brilliance of the dribbling that preceded it.
Wonderful goals, complete football, goals. We don't get much dribbling from Spain. Why is that? Have the anti-dribbling forces won this battle? Have they made their view that dribbling is a provocation, the orthodox view? Is the cynicism of "he had to take him down, what else could he do?" now so widely accepted that it's OK to ignore the rules of the game in order to stop a dribbler?
Spain, with their quick-passing, on-the-ground possession game have found a superb answer to the curse of defensive play. But have they also found it necessary to sacrifice football's most precious skill, only because it might cause them to lose hold of the ball?
Posted by Daniel Júnior at 15:30 No comments:

A football team is a holistic entity. Nothing exists independently of anything else; a change in one part of the pitch can have a profound impact elsewhere. It can often appear the the key contest in a game is between a vaunted wide man and an attacking full-back, but often the battle on the flank ends up being either a sideshow or a function of what is going on elsewhere on the pitch.
The full-back versus winger interaction is fascinating because there is no "right" way to approach it. Everything is relative. When Real Madrid beat Manchester United 3-1 in the first leg of the Champions League quarter-final in 2003, for instance, Roberto Carlos played as though David Beckham didn't exist, constantly surging past him. Beckham was a diligent wide midfielder, but his lack of pace meant he couldn't track the Brazilian without starting deeper, and he had clear instructions to start hight up the pitch, presumably to try to discourage Roberto Carlos from getting forward as he did. 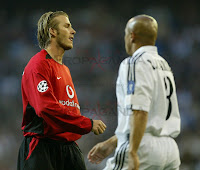 This was a classic example of the trait that Jack Charlton highlighted after the 1994 World Cup, noting that, tactically, full-back had become the most important position on the pitch. His point was that when 4-4-2 meets 4-4-2, or when one side plays narrow, the full-backs are the only players with space in front of them and they are the only players who can realistically expect to be moving at pace when engaging an opponent. Beckham couldn't cope with Roberto Carlos by sitting deep because Madrid's left back would already have accelerated by the time he met him. The logic therefore said that he should play high. But Roberto Carlos ignored him, leaving Beckham a lonely figure waiting for a pass that never came. United would probably have been better off either with Beckham sitting very deep, almost as an auxiliary right-back in front of Gary Neville, or sacrificing Beckham for a pacier player.
But that doesn't mean that when facing an attacking full-back retreat is always the best policy. In a World Cup qualifier in Zagerb in 2008, for instance, England manager Fabio Capello's response to the retreat of Danijel Pranjić, whose link up on Croatia's left flank with Ivan Rakitić had looked so potent, was to play Theo Walcott high on the England right. Pranjić ignored him, as Roberto Carlos had ignored Beckham, but found that when England worked the ball behind him, Walcott's pace was such that he couldn't recover. Walcott scored a hat-trick as England won 4-1 and became the first side to beat Croatia in a competitive game at the Maksimir.
This season's Manchester derby at City's Etihad Stadium offered a similar winger-on-full-back narrative. Nani had torn Gaël Clichy apart in one particular game between Manchester United and Arsenal and it was, presumably, memories of that which prompted Alex Ferguson to prefer the Portuguese winger to Antonio Valencia, who had been in superb form over the past two months, against City. As it turned out, Nani was a peripheral figure and Clichy not only handled him comfortably from a defensive point of view but also went charging past him to link up with the midfield on a couple of occasions.

Last season's Champions League semi-final between Real Madrid and Bayern Munich looked as though it would feature two similar battles on the Madrid left, where Cristina Ronaldo was taking on Phillip Lahm, and Arjen Robben was up against Fábio Coentrão in the first leg and Marcelo in the second. Because neither winger tracks back, these were individual battles. 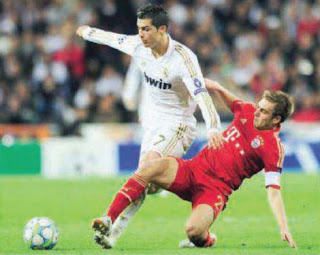 In the first game, in Munich, Coentrão had a dismal time, left isolated as Lahm was able to get forward to support Robben, and it was precisely that overlap that led to Bayern's second goal. In the second leg, Bayern, while on the back foot, were able to contain Ronaldo and Marcelo relatively comfortably. This was largely because Lahm got forward to support Robben occasionally while Marcelo was rarely able to link up with Ronaldo.
So what exactly was happening in these four games? 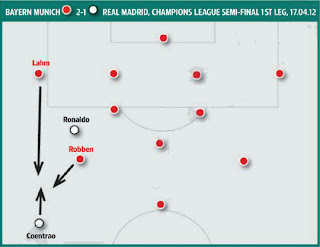 In Munich, Bayern controlled midfield despite Bastian Schweinsteiger having a poor game by his standards. Toni Kroos - a far more intelligent and adaptable footballer than Thomas Müller, whose place he effectively took - dropped deep from a position behind Mario Gómez to link with Schweinsteiger and Luiz Gustavo, effectively giving Bayern an extra half man than Madrid, for whom Mesut Özil - Kroos' counterpart in the respective 4-2-3-1s - remained high. That gave Bayern control of the centre, which they capitalised on by driving Xabi Alonso and Sami Khedira deeper and deeper, never giving either time on the ball. That encouraged Lahm to push up the pitch, which in turn enhanced their control of midfield.


Chelsea's response in the Final was simply to cede midfield. They attempted to frustrate Bayern's full-backs by lining up a double curtain in front of them; Ryan Bertrand operating as an auxiliary left-back in front of Ashley Cole, while Solomon Kalou played a more defensive role than usual, supporting José Bosingwa. 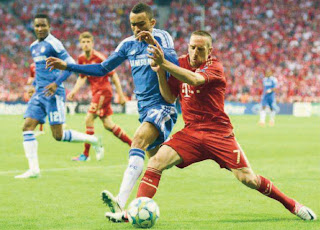 On the left the policy was a success, with Philip Lahm rarely getting forward to support Arjen Robben - which perhaps explains why Robben so often cut inside and shot from range. On the right, Bosingwa struggled at times with Diego Contento overlapping and it was from that flank that both the Bayern goal and the penalty stemmed. Bayern still dominated, and it would be absurd to suggest a team that ceded 35 chances wasn't fortunate in some way. But, equally, Petr Cech only had to make two saves, which suggests that Chelsea, up to a point, at least restricted the type of chance Bayern created. 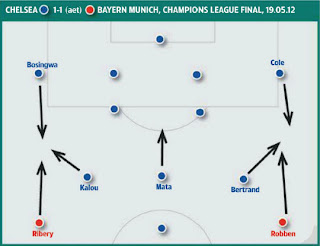 At the Etihad, the issue was less tactical than physical. United midfield three of Michael Carrick, Paul Scholes and Park Ji-Sung were simply overwhelmed by the power and drive of Gareth Barry and Yaya Touré, supported by the occasional retreat of David Silva, Carlos Tévez or Samir Nasri. That meant that the isolated figure was not the full-back, but rather the winger, which explains why Pablo Zabaleta had such success driving past Ryan Giggs.
The Bernabéu in 2003 offers a similar lesson, as United's midfield three of Roy Keane, Nicky Butt and Paul Scholes found themselves pinned back by Luis Figo, Zinedine Zidane and Flávio Conceição, making Beckham merely an adornment as Roberto Carlos effectively joined Claude Makélélé in ball-winning.
In the Maksimir in 2008, it was more that England sat deep, defending territory, and then picked out Walcott with long through-passes.
In all four games what happened on the flank was conditioned by what happened in the middle and, in at least two of the cases, control of the centre brought control of the flank, which in turn enhanced control of the centre.
In football everything is connected and everything is relative.
Posted by Daniel Júnior at 10:21 No comments: