Although he came off the bench to score a vital goal in the Final of the 2010 Libertadores, Damião was only a bit-part player that year for Inter. He didn't really make his name until last term, when a flurry of goals put him into contention for Brazil's number 9 shirt. The news from the 2012 Libertadores is that his form last season was no fluke and he found the target six times before Inter were narrowly beaten by their compatriots Fluminese.

Even more encouraging was the evidence of his all-round improvement as a player. Very much a finisher, he was proficient in the air and with both feet but not especially comfortable linking the play. This year, however, his back-to-goal game has show massive improvement and a highlight of the competition for Inter was the relationship formed with attacking midfielder Oscar.

The quick, skilful exchanges between the pair give rise to the hope that the duo could form an important part of Brazil's Olympic side.


One of the themes of recent Libertadores has been the success of Argentinian players who had been overlooked at home - and that has continued in 2012 by two strikers with Unión Española. But while centre-forward Emanuel Herrera may have been the Chilean side's cutting edge with five goals, even more impressive for one of this year's surprise sides was the contribution of 25-year-old Jaime.


With coach José Luis Sierra going with a front three, Jaime began the campaign on the right flank before witching to the left once Sierra had seen the value of left-footed Fernando Cordero cutting in from that side. 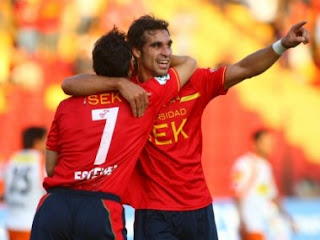 If Cordero was in the team to supply the crosses and Herrera there to finish, Haime did both. A winger and a penalty area predator, he scored three times in the competition, proving himself to be quick and dynamic outside the box, yet dangerous in the air and on the ground in sight of goal.


He has also shone brightest at the most important moments. Unión Española were expected to fall to Tigers of Mexico in the qualifying round, but Jaime came up with an excellent cross for Gonzalo Barriga to score in the first leg, and then clinched his side's place in the group phase with a fine header as Barriga returned the favour in the second leg. Jaime was also on target with smart finishes in both legs of the knockout round when Union went down fighting against Argentina's Boca Juniors.


Jaime played only a single top-flight game for Argentinos Juniors in 2009 before kick-starting his career the following year with La Serena in Chile. He then moved to the capital to join Unión Española in 2011, and this year's Libertadores will surely have given him a more prominent place in the shop window.
Posted by Daniel Júnior at 20:49 No comments: