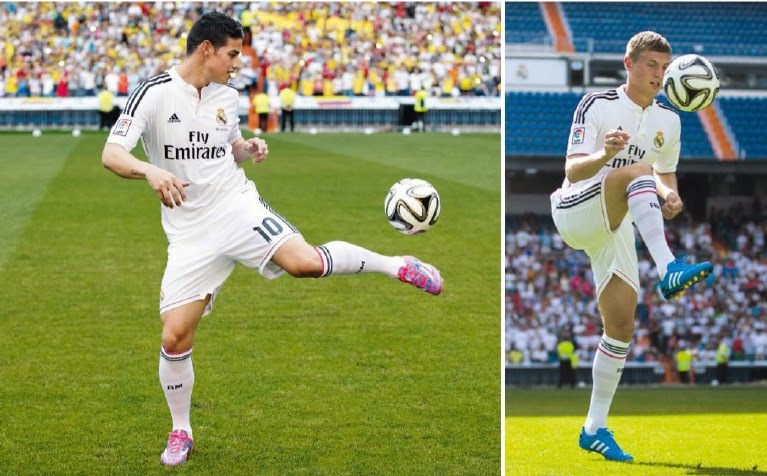 There are, essentially, two ways of building a team: you can start with the philosophy and acquire players to fit it, or you can start by signing gifted players and trust your coach to find a way for them to play together.

The vast majority of clubs lie somewhere between the two extremes, but since the days of Santiago Bernabéu, Real Madrid have tended to the latter. Florentino Pérez wasn’t dissuaded from that approach even by the failure of the galácticos era, and this summer he has followed a familiar path with the arrival of James Rodriguez and Toni Kroos for a combined total of €110 million.

The question is how they can be accommodated into a team that were, after all, crowned European champions for the 10th time in May.

The good news is that Real have, in Carlo Ancelotti, a coach who is a specialist in dealing with the whims of acquisition-happy owners. At Milan, he worked under Silvio Berlusconi and went along grudgingly with the owner’s demand that Filippo Inzaghi and Andriy Shevchenko should be played together. Since then, at Chelsea under Roman Abramovich, at Paris Saint-German under the Qataris and at Real, he has accepted his job is to take a giddy array of stars and make a constellation from them. It can take time, though. Last season, when the issue was fitting in Gareth Bale, Isco and Asier Illarramendi, it wasn’t until November that he settled on the 4-3-3 set-up – with Angel Dí Maria breaking forward from the left side of midfield – that ultimately brought success in the Champions League Final.

A harsh critic might suggest that Ancelotti needed that Champions League triumph to redeem the season. Had Real lost, it would have been a disappointing campaign – particularly given Barcelona’s struggles – to have finished with only the Spanish Cup. It is a remarkable feature of Ancelotti’s managerial career that he has won more Champions Leagues than league titles.

The problem now is where to fit Rodríguez into a forward line that alread features Cristiano Ronaldo, Karim Benzema, Bale, Isco and Jesé; something complicated by the fact that the midfield, with Luka Modrić and Di Maria, Sami Khedira, Xabi Alonso and Illarramendi, is already packed with creativity.

Last season, Ancelotti’s task was made simpler by the departure of Mesut Özil to Arsenal and, both for squad harmony and to comply with financial fairplay requirements, there will almost certainly be at least one major sale this summer. It appears that Dí Maria, despite his man-of-the-match performance in the Champions League Final, is the nearest to the exit – which may make sense if players are ranked by glamour, but is likely to create a whole host of new tactical issues.

Dí Maria was reportedly close to leaving last summer and was forced to adopt a deeper-lying position after staying. But he thrived and became the key to the way Real Madrid played. If necessary, he had the discipline to sit deep alongside Alonso and Modrić  and, as he showed in the Champions League semi-fi nal victories over Bayern Munich, he is a master at leading the counter-attack, adept both at carrying the ball from deep and at choosing the right time for a pass.

In games in which Real Madrid played against a massed defence, he could operate as a left-winger as Ronaldo drifted infield, while still having the awareness to cover for Marcelo when he overlapped from full-back. It’s hard to see who else in the squad could realistically replicate that role.

And if Ancelotti sticks to 4-3-3, that means there is a danger, against better sides, of there being no link between the midfield and forward lines. Rodríguez has said it would be a “dream” to play with Ronaldo, Benzema and Bale. It may be that he’s merely speculating, but if that comment was based on conversations he has had with Ancelotti, it suggests a shift to 4-2-3-1, with the Colombian behind Benzema and flanked by the two most expensive players in football history. 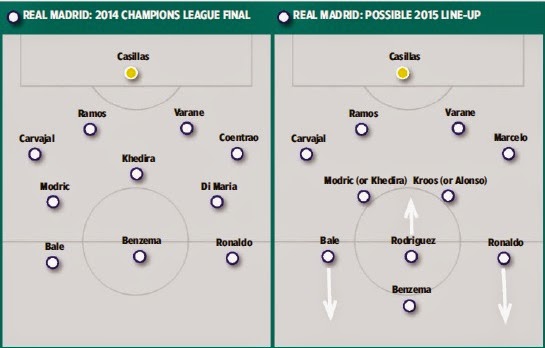 The formation initially sounds enticing, even if there is no space for Dí Maria, but the risk is that Real Madrid end up with too many players in too small a space. The front three worked last season because Benzema dropped off the front line, creating space for the athletic surges of Ronaldo and Bale. If Rodríguez is operating as a no10 there is less space for Benzema to move into, and that could lead to overcrowding and, more troublingly, a lack of the verticality, of Bale or Ronaldo suddenly barrelling through from deep, that made Real so thrilling at times last season.

And that’s without even mentioning Isco who, at 22, may accept a role as areserve, and Kroos who, as a 24-year-old World Cup-winner, probably won’t.

The German, at least, can play either as an attacking or holding midfielder – some have suggested that his passing isn’t quite quick enough to play as a creator at the very highest level and that the deeper-lying position is more suited to him – but that still doesn’t create an obvious space for him. If the shape is 4-2-3-1, he is either competing with Rodríguez for the central creative role or with Modrić , Alonso, Illarramendi and Khedira for one of two deeper slots – a glut that has led to suggestions that Khedira could be sold.

That’s if the shape is 4-2-3-1. If Ancelotti sticks with 4-3-3, the pressure is eased on the deeper-lying players, but it probably means Rodríguez operating as Ronaldo’s back-up on the left, with Isco
relegated even further down in the pecking order. Ronaldo could become a central forward – something he did to some effect in his days with Manchester United but has been reluctant to do since.

In the history of the game there have been very few squads that have contained such talent as Real Madrid’s. Ancelotti’s job is to forge a team from those riches. It’s not an unfamiliar job for him, but that doesn’t make it any easier.
Posted by Daniel Júnior at 13:37 No comments: