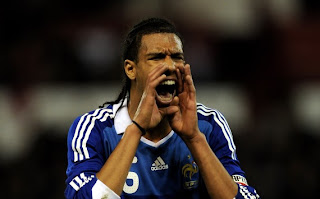 For the last couple of years, the Toulouse midfielder has managed to fly under the radar of many fans due to the prominence of Yann M'Vila, but with the Rennes' man's fall from grace, the more defensively astute player can now step into the spotlight. Boasting plenty of Ligue 1 experience from his time with les Violets, he is a more physically imposing player than his compatriot, smarter positionally and stronger in the air. Technically he is strong too, and now is his time to shine in the national team. His pedigree is well known among the top clubs, and the likes of Barcelona and Arsenal have been following him for several seasons now. 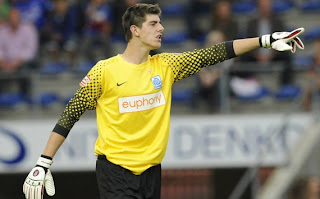 Having joined Atletico Madrid on loan from Chelsea to replace David de Gea, the 20-year-old Courtois put in a number of fine displays last season. Despite De Gea's critics since moving to the Premier League, the Belgium international certainly had big gloves to fill at the Vicente Calderon, and fill them he did. Producing some scarcely-believable saves to complement his commanding performances, he picked up where the Spaniard left off. If this promising Belgium side are to live up to the hype, then they are going to need a solid base on which to build. Fortunately, Courtois can be that very cornerstone for the next two decades. 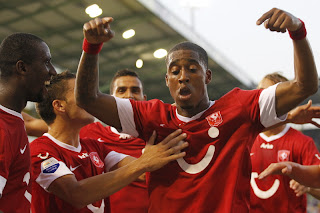 The versatile midfielder made his Oranje debut in the friendly against Ukraine in August 2010, but had not been called up since. However, due to his excellent start to the Eredivisie season with Twente, national team coach Louis van Gaal had no other option but to recall the 22-year-old for Netherlands' first World Cup qualifier against Turkey. Fer, nicknamed 'The Bouncer' for his impressive physique, is a typical modern midfielder, who not only does plenty of work defensively, but brings something to the table in attack. He has shown over the years that he has an eye for goal, and his well-timed runs forward can trouble any defence. 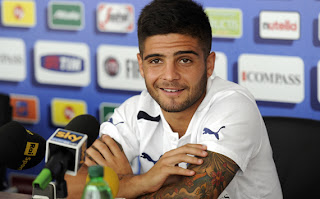 At 21 years old, Lorenzo Insigne received his first international call-up on Sunday evening. The diminutive forward has spent the last two seasons away from parent club Napoli, but impressed while at Foggia and Pescara with his eye for goal. The departure of Ezequiel Lavezzi has opened the door for him at the San Paolo, and his frightening dribbling ability in one-on-one situations and from set-pieces marks him out as a notable prospect. He has scored twice in three Under-21 appearances for his country, and the 2014 World Cup qualification campaign could be the perfect platform for him to burst into football's global conscience. 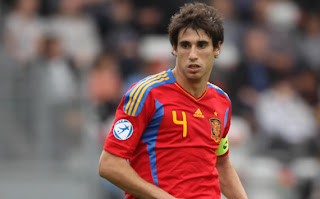 The curious case of Javi Martinez. At the age of 23, he has already won the World Cup and the European Championship, but he has been little more than a squad player in both of Spain's most recent successes. Fresh from his €40 million move from Athletic Bilbao to Bayern Munich, he will be keen to show that he has what it takes to thrive at one of Europe's biggest clubs. And with La Roja coach Vicente del Bosque likely to need defensive or midfield reinforcements along the road to Brazil, the Basque midfielder will have ample opportunity to cement a first-team place for himself. 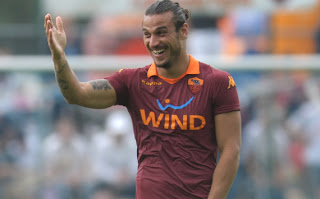 Pablo Osvaldo has been threatening to explode for a couple of seasons now after two promising terms at Espanyol and Roma, but the 2014 World Cup qualifying campaign could be when he really hits his peak internationally. The 26-year-old has enjoyed a stunning start to the Serie A season, scoring a brilliant acrobatic bicycle kick against Catania and a delightful chip at San Siro to down Inter. Blessed with power, pace, technique and a bullet header, Osvaldo is expected to start for Italy in Bulgaria and has set his sights on a long-term partnership in the Azzurri attack with the currently injured Mario Balotelli. 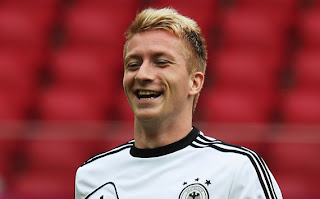 From keeping Borussia Monchengladbach in the Bundesliga to firing them into the Champions League, Marco Reus has been making quite the name for himself. His progress on the international scene, however, has been stunted. Blighted by injuries, he was unable to make his Germany debut until October 2011, some five months after receiving his first call-up to Joachim Low's squad. Since then, though, he hasn't looked back, and now looks set to be an automatic pick at the expense of either Thomas Muller or Lukas Podolski. Now with champions Borussia Dortmund, he has all the ability to star not just in qualifying, but in Brazil itself. 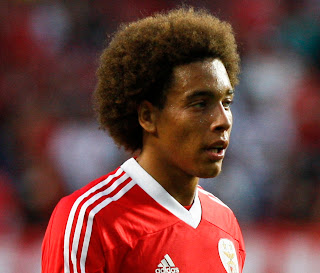 One year on from joining Benfica, Witsel is on the move again, this time to Zenit St Petersburg in the Russian Premier League for a whopping €40m. He has been in and around the Belgium set-up for around four years now and, like many of his undoubtedly talented team-mates, he has yet to make a significant impact in the international arena. He gained notoriety for his unedifying stamp on Marcin Wasilewski in a Belgian league game between Standard Liege and Anderlecht in 2009 but, the occasional red flash aside, he is undoubtedly one of the key figures in this most promising of Belgian outfits.
Posted by Daniel Júnior at 09:08 No comments:

Daniele De Rossi recently reaffirmed his commitment to home-town club AS Roma, citing the affection shown to him the previous weekend when the Giallorossi played their first friendly of the new season at their Stadio Olimpico home. The 29-year-old midfielder spoke in reverential tones of his love for everything Roman and the deep-seated loyalty he feels for the club and its famous colours.

In rejecting the sustained approaches from Manchester City, De Rossi proved once again that, for footballers, the old 'there's no place like home' adage can resonate as loudly as it does in any other walk of life. Even without home-field advantage, the comfort of familiar surroundings or the adoration of local fans afforded to De Rossi, most players quickly become accustomed to what they forever refer to as 'their' club.

Perhaps the most encompassing example of this in today's game is to be found at Barcelona, where more than half of the current first-team squad are products of the club's famed academy at La Masia. Players may leave for other clubs but, as Gerard Pique, Cesc Fàbregas and Jordi Alba proved over the last few years, the lure of the Blaugrana never really leaves.

This shows a sense of belonging that seems to hold true throughout Spain, a country where it is difficult to imagine home-grown players crossing the Clásico divide. Neither Barcelona nor Real Madrid currently have any player on their books who has represented the other, and it is hard to envision anyone on either side changing allegiance in the current climate, just as it seems impossible we could see Atleti icon Fernando Torres join Real Madrid later in his career.

Even in England, Torres' move from Liverpool to Chelsea is a rarity, with moves between the so-called 'Big Four' - the two Manchester clubs, Arsenal and Chelsea - seldom happening.
In Italy, however, the story is quite different, with no fewer than 24 players among the squads of Milan, Roma, Inter and Juventus who have, at some point in their careers, made an appearance at one or more of the other top four clubs. There are many reasons for this, not least of which is the aftermath of the 2006 Calciopoli trials, which saw Inter take full advantage of the situation.
Not only did the Nerazzurri bring in two players from the then relegated Juventus - Patrick Vieira and Zlatan Ibrahimovic - as well as former Roma players Walter Samuel and Cristian Chivu, but their signings displaced several talented players to other clubs. The presence of Nicolas Burdisso in today's Roma squad can be directly attributed to the fallout of those match-fixing punishments, and the same can be said for Gianluca Zambrotta's arrival at Milan via Barcelona.

Luciano Moggi's transfer policy while in charge of current champions Juventus also played a key role as his desire to build a team to win instantly was at the expense of the future. It may have worked brilliantly at the time but, by using products of Juve's hugely successful Primavera and Youth Sector as leverage to sign other players, there are now many ex-Juventini at other clubs, including both Simone Perrotta and Federico Balzaretti at Roma.

The mismanagement and a lack of a coherent transfer policy at Inter prior to 2006 is another reason for the shuffling of players at the top. Is there any other top club across Europe who has released players as talented as Adriano, Fabio Grosso, Leonardo Bonucci, Mattia Destro, Clarence Seedorf and Andrea Pirlo over the last ten years only to see them enjoy the best years of their careers elsewhere? Unlikely.

Prior to the takeover led by Thomas DiBenedetto, the financial difficulties of AS Roma were also a major factor and the sale of Alberto Aquilani to Liverpool - as well as the expiration of Philippe Mexès' contract - were almost exclusively allowed in order to permit the Giallorossi to survive and compete in an ever decreasing calcio elite.

Above all, however, it has been Italian football's lack of faith in young players that sees so many talented players switch clubs with increasing regularity. Of those 24 players to have lined up for more than one of Serie A's big four, 14 grew up in the youth ranks of another top club. This is a percentage unparalleled almost anywhere in world football.

While some have taken a longer route back to the top after being discarded, others - like former Milan striker Marco Borriello, now at Roma - were sent directly from one to the other. Milan's signing of Zlatan Ibrahimovic undoubtedly played its part but Borriello could have given some much needed depth to an attack that at times last season looked bereft of ideas and short on goals.
Before the crazy swap deal that saw Antonio Cassano and Giampaolo Pazzini change sides and Andrea Pirlo join Juventus on a free transfer following his release by Milan, Alessandro Matri was the latest player to cross the boundaries of Serie A's top clubs. Despite spending ten years on the books of the Rossoneri, he made just two appearances for the club.

Yet again Juve used the rights to one of their own youth products, Lorenzo Ariaudo, to secure the player while fielding ex-Inter defender Leo Bonucci in Ariaudo's position. It would be no surprise to see the latter, now owned wholly by Cagliari, spend three or four years in the provinces only to surface at another big club later in his career.

This is no new trend in Italy, where Giuseppe Meazza played for Inter during the 1930s and then Milan, Juventus and - eventually - Inter again in the 1940s. Roberto Baggio repeated this Triple Crown in the 1990s, as did Edgar Davids and Christian Vieri. Gunnar Nordahl moved directly from Milan to Roma, Jose Altafini and Kurt Hamrin played for both Juventus and Milan while John Charles may have made his name at Juve but also played ten matches during a brief stint at Roma.
Perhaps the strangest aspect of this phenomenon, however, is that Italy also boasts the greatest number of one club icons, both now and in the past. De Rossi's decision places him alongside team-mate Francesco Totti, the evergreen Inter captain Javier Zanetti and Udinese forward Antonio Di Natale as the latest high-profile examples of a pattern that flows from Gianpiero Combi, Valentino Mazzola and Giampiero Boniperti through Gigi Riva, Giancarlo Antognoni and Gianni Rivera to Beppe Bergomi, Franco Baresi and the recently departed Alessandro Del Piero.

Like many aspects of Italian life, there is a stark juxtaposition between this intense loyalty and its total absence. From prodigies to failed youth, mercenaries and bandiera, Italian football truly has it all.

Posted by Daniel Júnior at 15:05 No comments: