Farewell to the Misunderstood Maverick

Tony Pulis was disliked for his methods at Stoke City, but it is unfair to compare his side with 1980s Wimbledon. 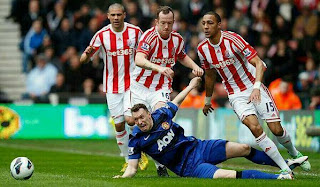 Amid the flurry of farewells that characterised the end of the Premier League season, there were two that went by with such a lack of fanfare it almost felt poignant: Tony Pulis and Michael Owen.

It feels strange, even now, to link the furious Welsh baseball-capped pragmatist with the lost boy, frozen forever in the memory of celebrating his wonder goal against Argentina in the 1998 World Cup. Yet they ended up together at Stoke, left behind by the tactical evolution of the game.

Perhaps that is a little unfair on Pulis. He took them from the third tier to the second in his first spell at the club and then, in his second, into the Premier League. Next season will be Stoke's sixth in a row in the top flight, their longest stint at that level since they were relegated in 1977. His achievement, though, always seemed undervalued because of the perception that he was nothing but a long-ball merchant.

The obvious contrast is with a man who, having kept his side in the Premier League for an unexpected period of this season: Roberto Martínez. He, of course, won the FA Cup with a Wigan Athletic side that played tactically interesting, attractive football and he was working on a more limited budget than Pulis. But there still seems something strange that of the two, it is the one whose side were relegated who was more in demand this summer. Pulis seems doomed to faint praise because of the general dislike for direct football - a view enhanced by the importance of TV in the modern game.

The influence of a mass audience is something which was touched on by Real Madrid general manager Jorge Valdano when he said: "I heard [the boxer] Carlos Monzón's trainer, Amílcar Brusa, explain that when a boxer fights on television, it's crucial he throws away many punches, regardless of where they land. That's because TV demands activity."

Valdano was lamenting what he sees as the needless haste of the modern game, the loss of "la pausa" - but the likes of Stoke have also suffered. Direct football leads to aerial challenges and they often lead to free-kicks - which is why Niall Quinn and Kevin Davies regularly used to commit more fouls than anybody else in the top flight. It's no surprise that Stoke committed 12.8 fouls per Premier League game last season, more than anybody else, as it's a function of a direct approach rather than a sign of dirtiness. And free-kicks mean a break in play and a loss of the fluidity that makes the game watchable.

There could be a visceral thrill in watching Stoke play, particularly if they won a string of corners against a theoretically more glamorous side and were able to discomfort them with the energy and physicality of their approach, but there was rarely much aesthetic pleasure. Initially Stoke fans seemed happy enough with their status as the underdog scrappers - even adopting "Swing Low, Sweet Chariot", a song more usually heard at Twickenham than in football grounds, in response to claims they played something  more akin to rugby than football. But more recently the drip-drip criticism and the slog of watching unappealing football every week has brought grumbling.


This, after all, is the great problem of the Premier League: there is a very clear ceiling for the majority of clubs, the top five (perhaps six) operating on such a different financial plane to the rest that two-thirds of the league can aspire to no more than mid-table mediocrity. Eventually that begins to pall - particularly if the football itself produces so little in the way of thrills.

At Christmas, Stoke had conceded just 13 goals in 18 games. - one of the best defensive records in Europe - but for what? To finish 13th. The days of fielding a back four compromised entirely of centre-backs may have gone. but Marc Wilson and Ryan Shotton aren't exactly the most attacking or skilful of full-backs.

And yet there must be a caveat. Stoke may have been defensive and direct, they may have favoured work ethic over technical skill, but they were never nihilistic in the way that the Wimbledon side of the 1980s was. Managers who spoke of being outmuscled by Stoke seemed to be playing on referee's preconceptions rather than looking at the reality. Stoke only committed 0.4 fouls per game more than Manchester City this season. They never spoiled or engaged in the overt intimidation of Wimbledon - a fairy story let down by the cynical reality. 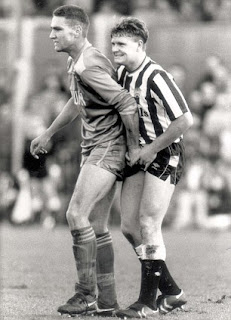 And Pulis did try to change. Signing the likes of Matthew Etherington and Jermaine Pennant was an attempt to make their game more about crossing than long balls from back to front. Buying Tuncay Sanli, similarly, was supposed to add a creative edge, although Pulis never seemed to quite trust him. Even bringing Owen could be seen as an effort to change the image of the club.


The truth, though, is that Owen has been a busted flush for some time now, a player over-reliant on speed who lost his pace, and old-fashioned type of forward who needed a particular type of player. either target man or creator, alongside him. In Peter Crouch, Stoke seemed to have just such a foil, but even then Owen couldn't produce. let down by his body and failure to adapt his game. 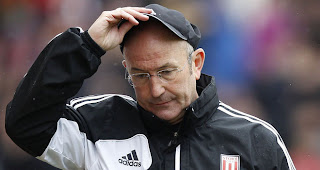 He, and forwards of his ilk, really are the past. Pulis, though, has shown himself capable of imbuing a side with great defensive organisation, with a functional method that produces results. Admittedly, a lot of those results are 0-0 draws (six this season) but Stoke may still end up missing him.

And it would be a shame if direct play were to be lost altogether; one of the great joys of football is its variety. Pulis had his own method and it worked - it just wasn't to the taste of everybody.
Posted by Daniel Júnior at 16:09 No comments: